Prior to Establishment: Primary Period

Members of the Assembly and the Citizens of Ulsan, Promoting the Establishment of a National University in front of the Parliament Building (July 14, 2004) 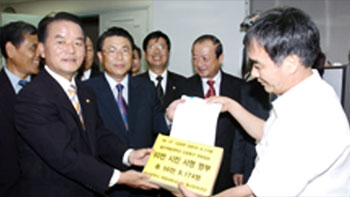 This is the period where the first president of UNIST, Moo Je Cho’s leadership and tactics came into play. President Cho stated “The quality of a University cannot overpass the quality of the professors, and great faculty also attracts outstanding students.” With this in mind, he personally went on a journey to recruit world-renowned scientists and also to attract outstanding students into UNIST by visiting various high schools in the world and organizing information sessions.

The University’s first entrance ceremony was held on March, 2009, along with the establishment ceremony at the ongoing construction site on campus. At the ceremony, 500 admitted first-year students vowed to build UNIST the ‘Pioneering global science and technology institute that contributes to humanity.’ All admitted first-year students were the top 5% students of Korea, and this helped UNIST to become one of the best universities nationally.